Action Bronson is a Queens bred Albanian bearded rhyme animal of legendary proportions. The former chef turned rhyme smith started rapping in 2009 at the urging of his close friend fellow MC Meyhem Lauren and quickly realized he was a natural. After dropping the Come Up EP for free in 2010 Bronson followed up with the critically acclaimed ‘Dr. Lecter’ produced in it’s entirety by Tommy Mas (Team Facelift). The song “Shiraz” and the viral video of the said song quickly spread like wildfire and Bronson became a favorite of the hip hop blog cognoscenti after being championed by sites such as Nah Right and 2DopeBoyz. As Dr Lecter continued to grow Action hooked up with DJ/Producer extraordinaire Statik Selektah to craft the soon to be classic ‘Well Done’ album which was also embraced by critics and the masses featuring such songs as “Cocoa Butter” with Nina Sky and the epic “Miss Fordham Road”. Action finished a project in February with producer Party Supplies for Reebok entitled ‘Blue Chips’ which is a free give a way. Bronson has toured across the states as well as Europe in an effort to increase the scope of his already short yet prolific career. Bronson has appeared in The NY Times, GQ, Details, The VIllage Voice, The Source, Rolling Stone and several other publications and is currently working on a pilot for the food network. In addition Action is working on several projects to be released in 2012 including a record with The Alchemist, a record with producer Harry Fraud and the follow up to Dr. Lecter titled Mr. Wonderful produced once again by Tommy Mas.

Who cares what the people say about his voice sounding like Ghostface?! This guy is dope, and is set to storm the scene hard!

‘Dr. Lecter’ album soon to be released on Vinyl! 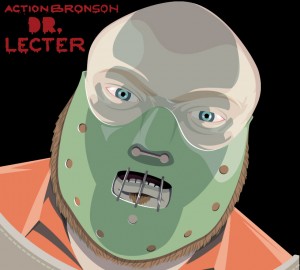 Over a year has passed since the release of the album that brought serious attention to Action Bronson. Now, Chopped Herring Records have pressed this underground classic to limited, double-vinyl. As there have only been 500 copies pressed the album is not cheap; £26.99 (exc. shipping). If you have the cash there is a bundle pack which includes the album, instrumental EP and a bonus white label 12″, costing £47.99 + shipping. Unfortunately these limited colours are sold out, so get in quick for the standard black vinyl copies! The release is available for order on Chopped Herring Records, and will be shipped at the end of June.