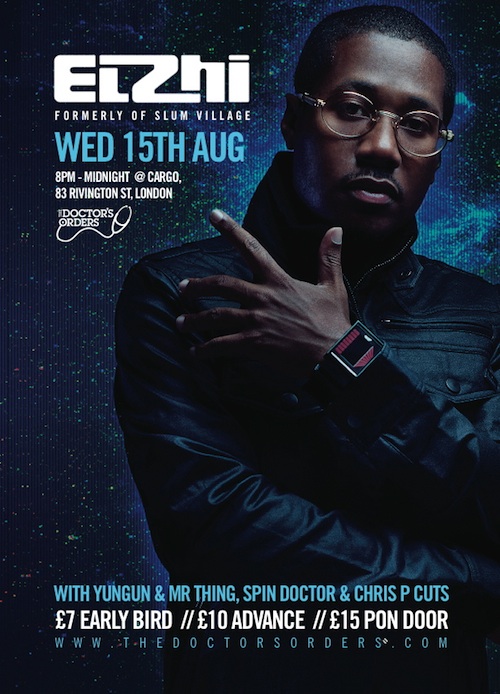 Before the world ever heard the name ELZHI the young artist was sitting in the back of classrooms thinking of rhymes, spitting verses while his friend banged out beats on desks. He sharpened every blade in his arsenal, developing his style to measure up against the competition in Maurice Malone’s Hip Hop Shop, the legendary proving ground for Detroit artists that produced some of the greatest emcees in the world.

ELZHI spent years paying dues, writing songs, entering battles, and recording demos until he finally made his international debut on “Come and Get It,” a standout track from J-Dilla’s ‘Welcome 2 Detroit’. The acclaimed song drew massive attention to the mysterious artist and made his unfinished EP, Out of Focus, a highly sought after recording.

ELZHI fuelled this buzz by joining Slum Village in 2001 elevating the crew’s reputation, and allowing him to reach new levels of lyricism. He recorded multiple albums with his former group, selling hundreds of thousands of records, and touring the world.

In 2004, ELZHI released ‘Witness My Growth’, a two disc mixtape featuring many of his lost or unfinished solo songs, which has come to be considered an underground classic. Upon his returning form his first solo tour he promptly released the ‘The Preface’, his solo debut on Fat Beats Records. The album helped to solidify his reputation as one of the most inventive lyricists in the world, earning acclaim from legendary artists and fans alike. In 2009, responding to the demands of his passionate fan base, ELZHI released The ‘Leftovers’ mixtape, a collection of rare tracks and unreleased exclusives featuring the hit single “Deep.”

In 2010, no longer content with being “your favourite rapper’s favourite rapper,” ELZHI got down to business. Moving past the relationship with his former group, ELZHI has reinvented himself as a solo artist and reignited his early buzz. This year, he released ‘ElMatic’, a homage to Nas’s classic debut, ‘ILLmatic’. A labor of love that set the internet alight, the project finds the Detroit emcee creating new songs out of Nas’s originals while rapping over the Will Sessions Band’s interpretation of the original beats.

A firm favourite of The Doctor’s Orders heads Elzhi hits London for what is sure to be another incredible performance of his work including the ‘Out Of Focus’ EP which is now finally available for download exclusively through www.Elzhi.com
As ever The Doctor’s Orders residents in the shape of Mr Thing, Spin Doctor, Chris P Cuts & MC Prankster will be warming things up with their usual blend of soulful sounds.