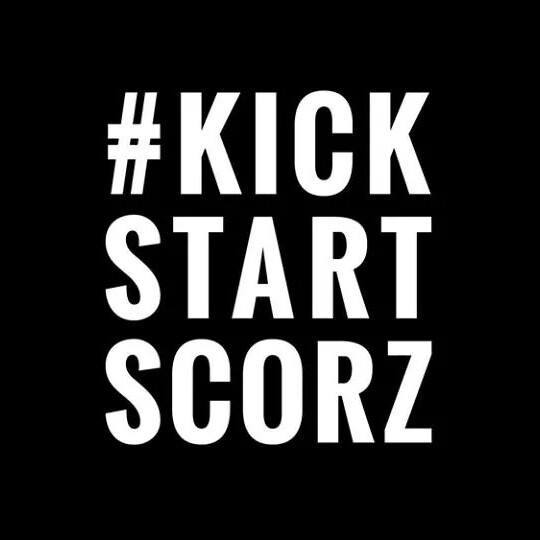 OK people listen up.. If you’re familiar with British rapper Scorzayzee then you need to take a look at this! If you don’t know, then seriously you ought to know this breah’s ferocious rap steas! Even if you’re overseas and you can’t get ya head around the diverse accents on this little island of UK, you really gotta get down with Scorz’ lyrical flows, metaphors and precognitions!
Please make a pledge/donation to #KICKSTARTSCORZ and help get this missing album made! Those that donate £20 get a limited vinyl copy with your name printed in the ‘shouts’, take a look at the options.
Trust Us yeah!!! You really won’t be disappointed to be a part of this history in the making!
Take a look and listen to the video below, which will explain everything about this very very good cause!

This is a story of extreme fandom; three die-hard Scorzayzee fans dedicating the past six months to manifesting the missing album from every hip hop head’s collection.

Let’s get Scorzayzee BACK into the studio to finally record the hip hop album that was never made!

With the short documentary above, the producers (Ste, Jack and Greg) hope to fill in the missing gaps and bring to light the journey of one of the most elusive yet revered, sought after and talented emcees this country has ever produced.

SUPPORT THIS CAMPAIGN AND #KICKSTARTSCORZ

A successful Kickstarter campaign will fund the writing, recording, mixing and mastering of the LP, enabling Scorz to do what he does best; tear up the studio! The campaign will also fund the production of T-shirts for select backers and the limited edition vinyl pressings.

By the way, the vinyl copies up for grabs are exclusive and limited to this campaign only. You will not be able to buy the same version of the release outside of this campaign! What’s more, the sleeve will have printed into infamy your name (and the names of everyone else who helps make this project happen with a pledge of £20 or more).

We have intentionally set our target low (for an album budget) to help ensure that at the very least, it can be made. If the pledges go above and beyond our stated target, this will provide us with many more production avenues (including more beats from killer producers) so please pledge generously and share this campaign far and wide.

Classic from back in the day! Scorz n’ his crew…
Out Da Ville – “Blood, Sweat and Tearz”

For every sneaker freak out there!
Scorzayzee – “Crepps”

For a good insight into Scorzayzee’s steas, check out the Dope Scorz’ mix tape by Donnie Propa of Heavy Links