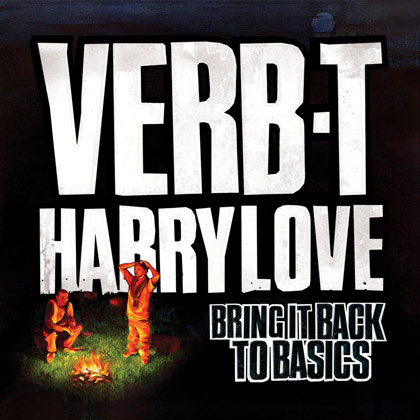 OK… So last year we saw Verb T release his entirely self produced album ‘I Remain’ which got a lot of hype! Unfortunately many of those missed the UK’s golden era in hip hop through the noughties and I would assume that many of those realising the talent the UK has right now missed some of those memorable albums. Well thanks to Harry Love (who was the leader of the production game around that decade, and still runs it strong now), for this particular collaboration with Verb T ‘Bring It Back To Basics’, an underrated classic in my eyes, in uploading this forgotten gem onto the t’internet for your listening pleasure, as the www. didn’t really exist in promoting music as well as it does now!
I’m not sure if there are plans for re-releasing this dope album as it is stated on Bandcamp for release March 2014, eight years on from it’s release in 2006, although this version has one or two previously recorded tracks that weren’t originally on the release.
Those cats feeling the hip hop coming from this tiny island, should catch a dose of this classic piece of history with features from Yungun aka Essa, Ramson Badbonez, Jehst, Kyza and a few others.
It’s also possible you can own your own copy on 12″ lp —>HeRe<---. Well worth a place in every hip hop junkies collection!