Something to bump when the warmer weather begins to draw closer…
Mr Bigz, formerly known as Bigz – is one of the UK’s most entertaining and charismatic hip-hop figures, whose new sound and look promises an exciting chapter ahead in his career.

The last year has seen the rapper undergo a physical transformation – a weight loss of 9 stones – that has in turn inspired an evolution in his music. An improvement in vocals and energy from the artisthelped to raise his already sky-high swagger, and such was the significance of this change that a new alias was coined to mark the fresh start. The skilled and quick-witted lyricism of Bigz remains, but this time with sharper suits and an altogether smooth character.

The popularity of Mr. Bigz and his former guises (Bigz, The Flygerian) among his peers in UK hip-hop is undeniable, working with a number of British rap stars since his 2004 debut mixtape. These include Tinie Tempah, Professor Green, Wretch 32, Chip and of course Sway, Mr Bigz Partner in rhyme for whom the label that Bigz Co-ownwed (Alliance Records inc) Co-released. He also featured on the Mercury-nominated debut album This Is My Demo.

Plans for a Bigz album around 2006 were suspended indefinitely following the tragic loss of his brother and label partners in a short space of time, which led to a hiatus from the music industry. When he was ready to pick up the mic again, it wasn’t long before the acclaim from fans, critics and tastemakers returned: the 2011 mixtape Quantum Leap, for instance, helped earn Bigz an OMA nomination, an honourable mention on MTV’s Hottest MCs list and a starring role in the UK Cypher for the BET Hip-Hop Awards of the same year. 2012 saw the release of The Bigz Bang Theory before the transformation to Mr. Bigz that has spawned the recent Classic Soul-inspired project My Funked Up Soul.

Mr. Bigz’s time in music has included live performances across Europe, and tours of the UK to support the likes of N-Dubz. Conor Maynard, Professor Green, Chiddy Bang and Wale. Collaborations from outside of hip-hop have included The Sugababes, Dionne Bromfield , recent X Factor alumni District3 (on their iTunes Top 10 Album-charting debut) and many more.

The appeal and charm of Mr. Bigz is considerably infectious, and with the artist enjoying making music more than ever, there is sure to be even further greatness on its way and subsequent new acclaim and support from all corners. 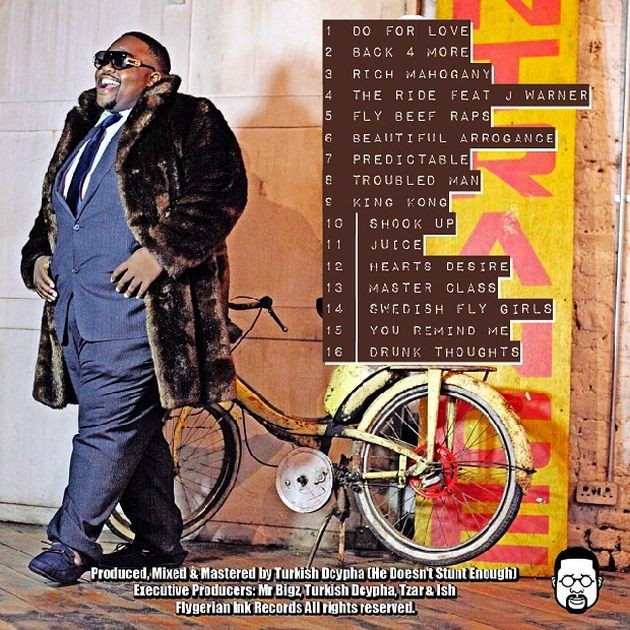 Tracklist – ‘My Funked Up Soul’