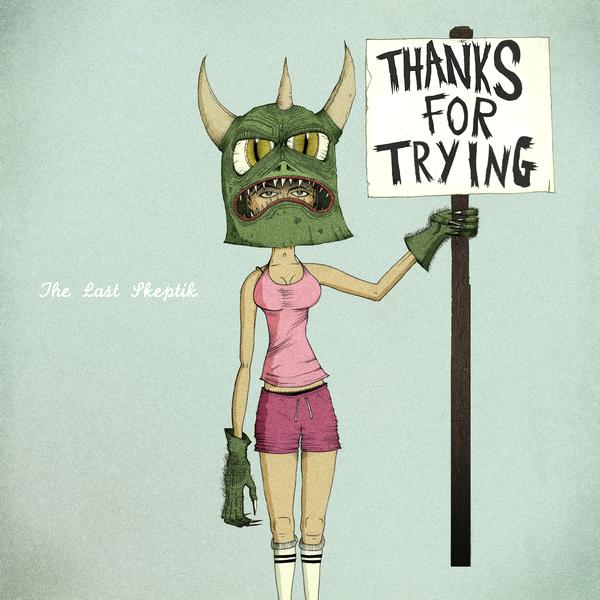 “We are pleased to announce the signing of DJ/producer The Last Skeptik. Following in the label’s footsteps of releasing instrumental led hip-hop albums from J Dilla, Pete Rock & Will.i.am, Skeptik will be releasing his largely instrumental album entitled “Thanks For Trying” in the spring of 2013. Backed with an orchestra’s worth of musicians, the hip hop-rooted production is taken to cinematic heights. This album will be a classic.
(For those unfamiliar with The Last Skeptik’s work, he has worked with a varied list of musicians, including The King Blues, Sway, Get Cape Wear Cape Fly, Jehst and Lowkey, and has remixed everyone from The Streets to Marina & The Diamonds.
The Last Skeptik has come a long way from building his first beats whilst skipping class at school. From releasing his debut single in 2004 featuring Sway, he has been steadily gaining fans with his production prowess.
Fast forward to 2012 and The Last Skeptik released the critically acclaimed “How Not To Make A Living” album with rapper Rewd Adams, with lead single “Everything’s OK” being supported by SBTV, BBC Radio One, RWD, Jump Off and KISS100. Now he is gearing up to release his second album, a highly anticipated instrumental project for BBE Records in 2013 which also features as guest Jehst, a cult hero (NME, 2011) and legend of hip hop from the UK. He has influenced nearly every modern rap artist in the country with classic albums “Return of the Drifter”, “Falling Down” and “Nuke Proof Suit”, and runs the consistently successful YNR Production label. Gavin Fitzjohn also features having previously written with and toured the globe with Paolo Nutini. Add to that residencies at London’s best hip hop night Livin Proof and new Knowledge and a blinding showcase at SXSW and U.S. tour, and 2012 has been a big year, with 2013 fast approaching we are very excited to have The Last Skeptik join a growing roster of London based acts all signed to the label. From 2007’s “Broken Window” collaborative album with rapper Verb T to 2010’s genre-flouting “Same Day Different Sh*t”, a compilation of commissioned remixes of major label artists, Skeptik has been busy writing, remixing and producing for a bevy of world famous artists such as Gorillaz, Enter Shikari and Kate Nash.”