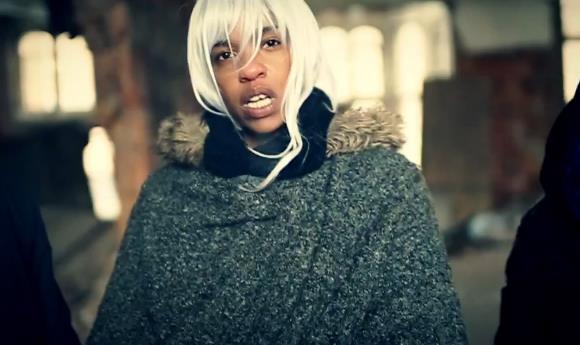 Panik & Psalm One (a.k.a. Hologram Kizzie) team up for the new single off Panik’s upcoming album “Coloring Outside The Lines.” Check out the new video directed by Sense Hernandez from Beast Factory Films.

With accesories and regimines being more exciting than some females these days, it’s nice to know that some of us can still rap. Rhymesayers has its hands full with this one, but part of that is because she has boobs. Psalm One, the self-proclaimed “fuck a” fem-cee is gearing up for her second offering, the follow-up to 2006′s critically acclaimed “The Death of Frequent Flyer”. After telling academia to piss off, then inviting it into the bathroom again, touring, male-to-female-to-female contact, manicures and dirt baths, Psalm is doing the unthinkable: letting you in. With the skills that are hardly anything but stellar, new production, old friends and the world by the tight and curlies, it’s on once again. And what more could you ask for? She’s not your prom date; she’s the one you hung out with at prom in the back of mom’s volvo, got blasted and talked about all the people with their noses in the air and thumbs up their asses. And she plays drums. Go figure.

In 2005 she was named as on of URB’s Next 100 and featured “as next to blow up” in such publications as: Chicago Tribune, Chicago Sun Times and The Onion which only added fuel to her ever-glowing fire. In 2006 these same publication touted “The Death of Frequent Flyer” as the best Chicago album of the year. So let’s get higher. The new as-yet-untitled album has all the makings of a masterpiece from a master who is still mastering herself. But masterbates. If you will. Back in the studio, back on her veggie tacos and ddr, and back for those who love her, who like her, and who just wanna look at a female spitting like that. Brace yourself for some searching and headnodding. It’s totally lovely.Chicago remains on her heart, the universe is on her brain and you can be damned sure the world is her playground. She doesn’t like oysters. Psalm One, Rhymesayer representer, Chicago darling and available for download right now. Don’t slumber. Unless there’s cute undies, fingernail art and pillows involved. Howl at her.