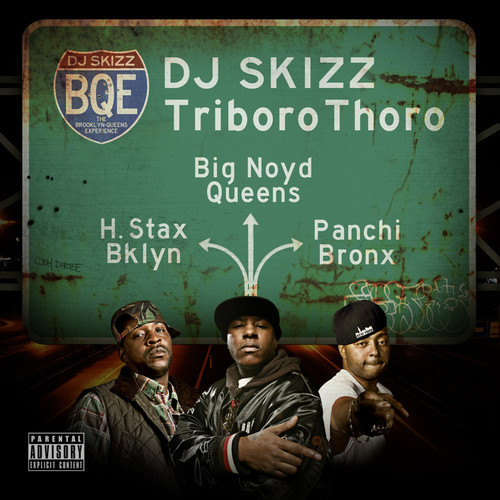 Brooklyn resident, and Boston native, DJ Skizz is set to release his highly anticipated debut producer album, B.Q.E. (Brooklyn-Queens Experience) on 23rd June 2013. The LP features Lil’ Fame (of M.O.P), Ill BILL, Roc Marciano, A.G., O.C., Steele (Smif-N-Wesson), FT (Fuc That), Torae, Masta Ace, Nature, Cormega, Craig G, Big Noyd, Havoc (of Mobb Deep), Psycho Les, Rah Digga, Tragedy Khadafi, and many more. DJ Skizz is a DJ, producer and member of the World Famous “Halftime Radio Show” on WNYU FM 89.1 with a career that spans over a decade. While attending NYU for a degree in music technology, Skizz joined the legendary Halftime Radio Show as a DJ/ co-host in 2000 and has been a mainstay ever since. He can still be heard there every Wednesday night from 10:30 PM – 1:00 AM (EST) on 89.1 WNYU, where he continues in the tradition of what listeners expect from New York radio, playing the best underground hip-hop and offering exposure to talented artists. The show celebrated its fifteenth anniversary in March 2013. To date Skizz has produced tracks for a slew artists including Lil’ Fame (M.O.P.), Big Noyd, Havoc, Infamous Mobb, Group Home, Sean Price, Roc Marciano, Masta Ace, Nature, Timeless Truth, Krumbsnatcha & many more. He has most recently laid scratches down on three songs off the Masta Ace / MF Doom LP Son of Yvonne.

“‘Triboro Thoro’ is the second track released to-date from DJ Skizz’s forthcoming producer album, B.Q.E. (Brooklyn-Queens Experience). “Triboro Thoro” features three emcees who embody NYC to the fullest. Hannibal Stax (of F.A.B.I.D. and the Gang Starr Foundation) hails from East New York, Brooklyn. Big Noyd (Mobb Deep) represents Queens (QB) and lastly Panchi (of NYGz) represents the birthplace of Hip-Hop, the boogie-down Bronx. They all represent different boroughs in NYC, but they all represent NYC and the NYC sound. “My good friend and talented producer, Marco Polo, and I often give each other records, samples, and drum breaks to use to see how we will flip them in our own style” says Skizz. “Marco gave me the sample used in this song and told me that it was perfect for me and my ueens dunny dun sound. I laughed, took the sample, fired up my MPC and the beat that came out was NYC to the fullest (thanks Marco). I called up H. Stax, Panchi, and Noyd and we recorded the song in Brooklyn. I then went back to the lab, laid down some cuts on the hook–and the result….. “Triboro Thoro.”