From The Diggers Union comes Hevehitta & DJ Unexpected, who have presented this new mixtape ep for free download. This is the first installment entitled “Duel Of The Iron Fists”, featuring the legendary Ghostface Killah on the vocals over the pioneering DJ Premier beats, with various kung-fu movie samples mixed in with beat breaks. Apparently these will only be released occasionally, with various themes accompanying the project.
DJ Unexpected has also provided a write-up below (continue) for the project, detailing the inspirations for each track presented here. 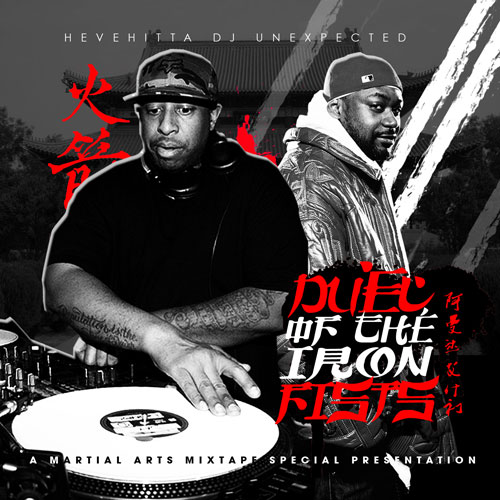 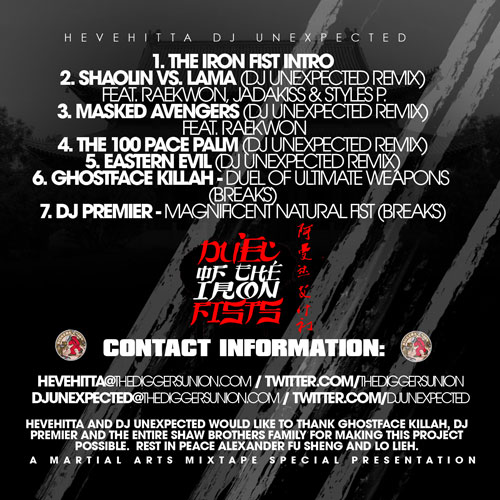 Write Up by DJ Unexpected

1. The Iron Fists Intro – Every story has to have an introduction, and so do all of our mixtapes. For this one, Hevehitta and I decided to shy away from the traditional scratch intro I’m known for and rely more on dialog to set up the premise. With classic background music used in such films as “Flag Of Iron” and “My Young Auntie” as the backbone, the characters are introduced and told about “The Iron Fist”, a legendary style very efficient in defeating enemies. The student (Ghostface Killah in this case), is denied the chance to learn at first, but is taught after enemies (The Lamas) raid Shaolin Temple. Naturally a fight erupts.

2. Shaolin Vs. Lama feat. Raekwon, Jadakiss & Styles P. – With Raekwon as his fellow student, Ghostface Killah engages in combat with Jadakiss and Styles P, the Lamas (a known nemesis of Shaolin) who are there to prove their superiority in martial arts. They are eventually defeated after a grueling duel. While it’s not entirely a DJ Premier influenced remix, he is represented on the first beat (None Of Ya’ll Betta ironically on Jadakiss’s first album), and it would make no sense to abruptly end the story. (Note- this track was originally featured on “Executioners From Shaolin”, Hevehitta and DJ Unexpected’s 1st entry into the Martial Arts Mixtape series).

3. Masked Avengers feat. Raekwon – With “That White” by Fat Joe and “Poet Has Come” by Blaq Poet as the backdrop, Ghostface Killah and Raekwon use their skill in weaving a story detailing their former life as drug dealers. Once again, the braggadocio element remains intact. Audio dialog is from the movie aptly titled, “Masked Avengers” (including the line used in the intro “We do what we want here…”; why was that included, you ask? Because we can do that!)

4. The 100 Pace Palm – DJ Premier does his part here with “Living Proof” by Group Home and “Mass Appeal” by Gangstarr serving as the backbone while Ghostface Killah reminds you that his style is “Mighty Deadly” (the acapella used here as well). The audio is courtesy of the late Lo Lieh (via Ted Thomas on dubbing) from the film “Clan Of The White Lotus”, where he displays his “100 Pace Palm” on Gordon Liu (coincidentally starring as Pai Mei in Quentin Tarantino’s “Kill Bill 2″).

5. Eastern Evil – Ghostface Killah’s “The Champ” acapella gets the remix treatment with “Above The Clouds” by Gangstarr feat. Inspectah Deck (fellow Wu-Tang Clansman), “MUG” by O.C. feat. Freddie Foxx and “F-U” by Teflon providing the music. Ghostface goes in for the kill against his enemies and his style is enhanced by the interlude between Pai Mei and priest Chi San (from “Executioners From Shaolin”). The outro audio is courtesy of Tommy Lee Ming Man’s character from “The Hot, The Cool & The Vicious”.

6. Duel Of Ultimate Weapons (Breaks) – Simple enough, it’s a collection of original samples used by Ghostface Killah or songs he was featured on. In keeping with the martial arts theme, the title was deemed appropriate (a classic Hwang Jang Lee movie I might add). (Note- some breaks were previously released on my classic series, “Look What I Found”).

7. Magnificent Natural Fist (Breaks) – Same as track 6, but this track focuses on DJ Premier samples, some of which were previously featured on the “Look What I Found” series. The title comes from a Korean film starring Elton Chong and Mike Wong (trivia time- a clip of it was featured on an episode of “How I Met Your Mother”; the villain has a 20 ft. arm).