“The homie Doom is on some real next marketing shit. Trust once this shit over here bubbles a likkle more I’m gonna be selling y’all boxes too, and u won’t know what’s in it. Lolz!
Doom and Akomplice have come together to create one of the most intriguing and mysterious collaborations of 2011. The project features a nailed-shut pine crate, which can only be opened by the force of a crowbar. Akomplice and DOOM have taken the consideration to include the needed crowbar, which nicely features custom artwork engraved on the metal front, matching the artwork on the box.
Weighing roughly 5 pounds, the contents of the box remain a mystery, unveiled only to those who acquire the pack. The pack will only be available for a 24 hour window, starting at 9am PST on June 8, 2011 and ending the following day at 9am. This box will be released exclusively at the Akomplice online-store and at the opening celebration of their collaborative store space in Santa Barbara, California.” 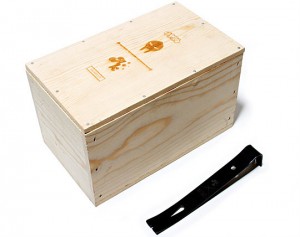