Sadly this weekend, musician and poet Gil Scott-Heron – best known for his pioneering rap The Revolution Will Not Be Televised – has died at the age of 62, having fallen ill after a European trip. Heron passed away at St Luke’s hospital, New York, on Friday afternoon. 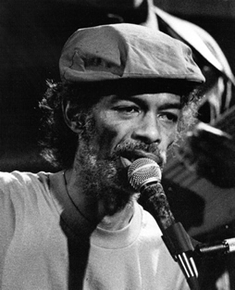 Jamie Byng, his UK publisher, announced the news via Twitter: “Just heard the very sad news that my dear friend and one of the most inspiring people I’ve ever met, the great Gil Scott-Heron, died today.”
Scott-Heron’s spoken word recordings helped shape the emerging hip-hop culture. Generations of rappers cite his work as an influence.

He was known as the Godfather of Rap but disapproved of the title, preferring to describe what he did as “bluesology” – a fusion of poetry, soul, blues and jazz, all shot through with a piercing social conscience and strong political messages, tackling issues such as apartheid and nuclear arms. Despite his reluctance he was as influential to rappers, like Mos Def and Common, as Howlin’ Wolf and Muddy Waters were to Clapton and Keith Richards.

In The Revolution Will Not Be Televised, first recorded in 1970, he issued a fierce critique of the role of race in the mass media and advertising age. “The revolution will not be right back after a message about a white tornado, white lightning or white people,” he sang.

Scott-Heron’s song ‘We Almost Lost Detroit’, written about a previous accident at a nuclear power plant, is sampled on rapper Kanye West’s produced single ‘The People’, performed by Common, and Black Star’ ‘Brown Skin Lady’. Scott-Heron’s 2010 album, I’m New Here, was his first new studio release in 16 years and was hailed by critics. The album’s first song, On Coming From a Broken Home, is an ode to his maternal grandmother, Lillie, who raised him in Jackson, Tennessee, until her death when he was 13. He moved to New York after that.

Scott-Heron was HIV positive and battled drug addiction through most of his career. He spent a year and a half in prison for possession. In a 2009 interview he said that his jail term had forced him to confront the reality of his situation.

Home Is Where The Hatred Is

Legend In His Own Mind

Me And The Devil