The wait is over, again: Hot Sauce Committee Part Two, the Beastie Boys’ long anticipated eighth album, released on the 2nd May. The album features guests Nas and Santigold. The album and lead single ‘Make Some Noise’ is out now.

The Deluxe Digital album includes the epic ‘Fight For Your Right (Revisited)’ film. Its an awesome video which remins true to the Beastie’s style. Ad Rock, MCA and Mike D manage to enlish a whole heap of satrs for a cameo rich offering which sees the band meet their future selves – hilarious. Danny McBride, Seth Rogen and Will Ferrell are among the other actors who appear in the updating of the rappers’ 1987 clip.

Check out the full video for ‘Make Some Noise’ here:

THIS TRACK IS AN ABSOLUTE BANGER! Those of you who were lucky enough to copp this on 7″ at Record Store day 2011, Keep it!!! 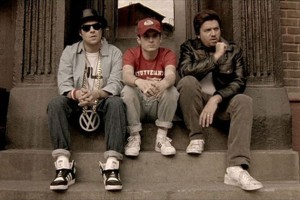