West Yorkshire based UK Hip Hoppers Knew Jeru’slum consisting of Jonny Alpha, Watson G on the rhymes; and Belinda Hards on the vocals release a free mini album. Come check it here at R22.
This selection of freshness features production from The Scarlet Pimpernel, Miss Tofelees & Keor Meteor and guest vocals from Stahhr (who features on a number of MF DOOM & John Robinson’s projects!!!), Iz-Real, Turtle Hands, Wide Boi along with cuts from Andy H!
I really like some of the production on this album so far that I’ve heard, released today! I particularly like the production and religious topic of conversation on track 6, even though I’m not religious I can relate, and am warming to the rest very easily; all round a good album. It aint too bad for a freebie at all! Expect some big things ahead from these religious rappers! 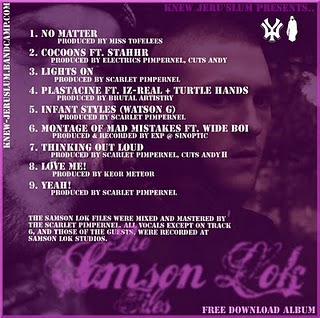 Here is the Video for ‘Love Me!’ the Free Download Single taken from the forthcoming ‘The Samson Lok Files’ Mini Album, released Free to Download from 28th February 2011!

This video is Directed by Kieran Malko, and features production from Paris based Keor Meteor. Mixed and mastered by The Scarlet Pimpernel. Peep it!

Get the CD Here:
knew-jeruslum.bandcamp.com