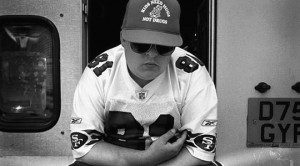 Scorzayzee (or Scor-zay-zee) is a Nottingham-based rapper, well known for his connection with the now defunct Notts supergroup Out Da Ville alongside artists such as C-mone, Lee Ramsey and Karizma.
Known for his multi-syllabic style and political view points he caused controversy in 2003 with his P-Brothers produced cut ‘Great Britain’ – a scathing response to the Iraqi war and hypocrisy amongst the country’s elite. Many believe this to be his masterpiece. This was an anti-establishment rant against the Queen, Tony Blair, the BNP, Freemasons and a few other people he threw into the equation. It gained him plenty of attention, getting picked up by Radio 1, 1xtra and even more hysterically the Daily Telegraph.
The lyrics to `Great Britain’ seem particularly poignant in this age of war and terror. It was a rally cry, a call to arms from a voice of dissatisfied British youth. The song ultimately questions how a country’s system of government can act so directly in opposition to the wishes of so may of those it represents.
It was something of a surprise therefore, when following his greatest success yet, Scorzayzee decided to call it a day and retire from rapping after this song. Rumours about his conversion to Islam, knocks on the door from federal officers and plenty more hype did nothing to calm the storm.
The track gained a surprise amount of love from major radio stations and the Hip-Hop fraternity and even got played on Radio 1.
In 2004 it was rumoured Scorzayzee had retired from making music due to converting to islam, although there were also rumours he had received threats from certain right wing pressure groups such as the BNP.
However, in a recent interview SScorzayzee had this to say:
“If I hear a beat and I get an idea again I’ll write another tune and put it out. But at the moment I’ve just got nothing that I want to say. I don’t want to talk for the sake of it. I don’t want to just make tunes for the sake of it, I want to do something special. All I know is that if I do anything else, it’s got to be worth coming back from retirement to say it.”
As of June 2007, rumours are rife over a Scorzayzee comeback, with the appearance of a myspace page.
Scorzayzee also recently made his acting debut, a career he is said to be interested in following.
In December 2009 the site www.YHBNews.com reported Scorzayzee had released his mixtape and new single ‘Luv me’ was receiving airplay. 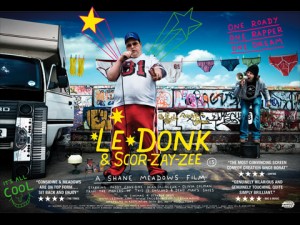