This is a FREE MP3 DOWNLOAD of track by Strong Arm Steady produced by Madlib ft. Phonte. In Search of Stoney Jackson is produced entirely by Madlib, longtime friend of Phil Da Agony and extended Strong Arm Steady family. The album’s conception owes a great deal to World Famous Beat Junkie, J.Rocc, who provided the trio with close to 200 of the Madlib the Beat Konducta’s tracks to choose from. Strong Arm Steady had previously rapped over Madlib productions on the Madlib and Talib Kweli Liberation album, but this full-length marks a long-desired collaboration between the four. It’s a hip-hop jam session, with the group acting as the rhythm section for an all-star cast of guest vocalists such as Planet Asia, Guilty Simpson, Evidence, Chase Infinite, and Phonte of Little Brother. 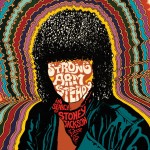