Spare Time is a free instrumental LP originally released in January 08. It has since generated a ton of great reviews and has been called a classic and personal favorite by many respected journalists and music aficionados.

Most of the tracks featured on Spare Time were pulled from Damu’s archive of tracks, and were created in 2005/2006. Damu included a few remixes on Spare Time including tracks with Insight, Kev Brown, and Panacea’s Raw Poetic. 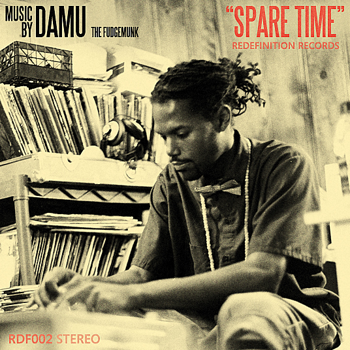 “Some of my most exciting moments are taking part in exposing music and talent that is truly staggering. Luckily, running Crate Kings affords the opportunity to share some of these rare musical moments with a likeminded community of listeners itching to expand their musical palette. So, it should be of no surprise that Crate Kings would jump at the opportunity to join forces with Redefinition Records for the release of Damu The Fudgemunk’s instrumental release Spare Time.

You’ve no doubt seen Damu making the rounds with his signature beat videos and live instrumental showcases or may have even been one of the tastemaking elite who snatched up a copy of Y Society’s (Insight + Damu) label release Travel At Your Own Pace. Well, there’s now finally a solution for those listeners who’ve simply wanted hear what happens when a digital sampler is rocked to its full capabilities.

As the first in a multi-part instrumental series, The Fudgemunk dug into his vaults to compile this previously unheard collection of vintage beats. Spare Time breaks us off with crispy, sampled drums and intricately chopped to death samples destined to keep heads nodding and mp3 players rumbling until the next release. More than a mere beat snippet compilation, Spare Time presents full length tracks that showcase masterful low pass filtering and phenomenal breakdowns, many of which occur at the very end of the track. Always one to deliver what a beat head really craves, Damu embraces the essence of Hip-Hop by taking us on a sonic sound trip using only a stripped down Akai MPC 2000 and the honed skill of a master craftsman.”
– DJ Semantik (cratekings.com)