(Video) Who Is Legend? He Is Legend!

A good blast of Hardkore for ya ear’oles! Come get hyped!

Not the usual sound you might find on a predominantly urban music blog site, but these guys are worth the mention! n’ of course, this site is dedicated to underground music!

The band’s roots reach back into the late 1990s when Adam Tanbouz, Steven Bache, Matt Williams, guitarist McKenzie Bell, and vocalist Schuylar Croom began writing and performing around Wilmington, NC, USA, while still in high school. In 2003, having previously played under the names of Stronghold, No One Wins, and The Uriah Omen, the name He Is Legend was adopted by members Tanbouz, Bache, Bell, Croom, and Williams. The name He Is Legend is an adaptation of the 1954 book I am Legend by Richard Matheson. After releasing their first EP in June 2004 entitled ‘91025’, the band signed on with Solid State Records and released their first full length album in November. ‘I Am Hollywood’ was a massive success and the band immediately began to experience a surge in popularity that extended far beyond their NC roots. After almost two years of extensive touring in the United States and Europe, the band temporarily relocated to California to record their next release. However, the release almost never saw the light of day as the group would almost break up right after they had finished recording. Suck Out the Poison was released on October 3, 2006 and triggered mixed reviews from long-time fans. It was evident, however, that the band believed firmly in the album and as a result were largely indifferent to often cruel criticisms from offended fans. Their confident, care-free response is portrayed in their music video “Attack of the Dungeon Witch” (see video below) which was released in March of 2007.

According to a recent blog, He Is Legend announced that they will be taking a musical sabbatical in the forest surrounding North Carolina recording studio, Warrior Sound Studio. The blog continues, saying that the material written during this hiatus will be used to create a record “literally made of solid gold (figuratively speaking).”
On April 24, 2008, He Is Legend posted four demo songs from said sabbatical, entitled “Decisions Decisions Decisions”, “Stranger Danger”, “Don’t Touch That Dial”, and “Everyone I Know Has Fangs”. These are from their recent demo sessions for their upcoming, currently untitled record.
There are rumors that He is Legend is no longer with Solid State Records, but neither He is Legend nor Solid State have reported or hinted any changes in their label. Stranger Danger is featured on the newest (as of 12/9/2008) Tragic Hero Records sampler, and are playing at a Tragic Hero Records show in 2009, possibly suggesting they are now on Tragic Hero Records.
In speaking with some fans at a music venue in Waco, Texas, the question was posed concerning the release date of the bands next album. Schuylar said that the new album should be out in either March or April 2009.

He is Legend takes their taste in music from various artists that include 80’s metal masters to 90’s alternative kings including –
AC/DC
Slayer
Alice in Chains
Nirvana
Stone Temple Pilots
Queens of the Stone Age
Foo Fighters
These bands have been covered by He is Legend in concert. In fact, He Is Legend is more recently known for tying the Stone Temple Pilots song “Dead and Bloated” into their hit “I am Hollywood” in concert.

Anyways, thats enough chat… Check out the videos ‘The Seduction’ and ‘Attack of the Dungeon Witch’ below…

Attack of the Dungeon Witch

A few more thrown in for good measure! Cos we like a little animation in videos!

The Walls Have Teeth

This ‘Is’ Fight Music! (Stampede) not for the feint of heart, both musically and visually!

Check out the site:
www.heislegend.com 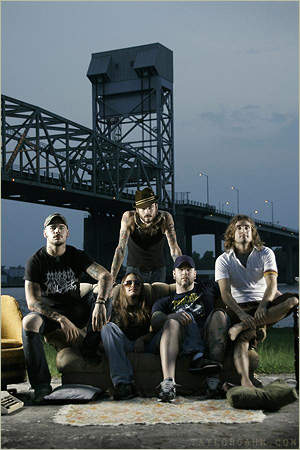