MC Skat Kat was an animated cat who appeared with Paula Abdul in the video for her song Opposites Attract in 1989. The character released an album entitled The Adventures of MC Skat Kat and the Stray Mob in 1991. Several of the songs made reference to Paula Abdul, but she did not provide vocals. She did, however, make an appearance in the video of “Skat Strut”, the only single to be released.

Despite the popularity of its music video (it became one of the most requested on MTV), the record did not sell particularly well.

MC Skat Kat was launched into the mainstream years later when he appeared in a public service announcement titled “Take it Back”, where he sang the title song about recycling. The PSA featured appearances from celebrities including Pat Benatar, Natalie Cole, Charlie Daniels, Lita Ford, Quincy Jones, B.B. King, Queen Latifah, Kenny Loggins, Randy Newman, Tone Loc, Ozzy Osbourne, Brenda Russell, Barry White, Stevie Wonder and a special appearance by Bugs Bunny. It only aired once on Nickelodeon in 1995, and was released to video shortly after it aired. The song “Take It Back” was also released as a single, but did not sell well.

MC Skat Kat was created by Michael Patterson and voiced by The Wild Pair duo of Bruce DeShazer and Marv Gunn on “Opposites Attract” and later voiced by Derrick Stevens in the MC Skat Kat Solo album effort.

1991: The Adventures of MC Skat Kat and the Stray Mob 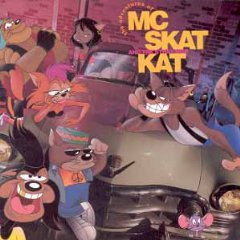