Live Audio mix from Caspa, one of the biggest in the Dubstep scene

Caspa grew up in West London, and was brought up on a diet of Jungle & Hip Hop. At the time he wasn’t old enough to go to the Jungle raves so had to be content with his tape packs of Brockie and Det. When garage emerged he naturally progressed into the sound and started attending garage raves.

After an injury which sadly ended his once promosing basketball career, he bought his first pair of decks and started DJ’ing. And after recieveing a free demo copy of Fruity Loops he started to experiment with the idea of building tracks in a computer program and got his first real taste of music production.

Under the name Quiet Storm he made a tune called ‘Bass Bins’ which was picked up by BBC 1xtra’s J Da Flex who showcased on his Underground Knowledge Show in 2003. The next day he recieved a call from DJ Lombardo (the first resident of FWD) who had just started his label Fragile Beats and spoke with him about a possible release of the track he had heard the night before on radio.

Due to unforseen circumstances, the label never blossomed and the track never saw the light of day, but determened not to give up he pursued his ambitions by starting his own label Storming Productions in 2004 and started a weekly radio show on the prolific Rinse FM. With a successful year of working and releasing with artists such as Search & destroy, Dubchild, Toasty Boy, DJ Narrows and Oris Jay the label was well established as one of the dominating labels of the time.

After recieveing a demo from Swedish producers L-Wiz, he decided to start a sister label to Storming called Dub Police, this labels focus was to give platform to up and coming artists and push the newly developing dubstep sound – it was also at this time he had his debut release under the alias of Caspa, after which he had a release on well known dubstep label Tempa (Rubber Chicken), which had been one of the largest tracks of the year and is still regarded by many as an anthem.

With a string of succesful releases from artists such as L-Wiz, N-Type, Rusko, The Others and of course his own productions under the Caspa alias, the label began to grow in to one the dominating labels within the newly formed dubstep genre.

After a number of highly successful releases and remixes, in October 2007, Caspa along with label artist Rusko, were appraoched by Fabric and asked to mix the 37th installment of the legendary FabricLive series, following on from estalished artists like John Peel, Fabio & Grooverider and DJ Craze. This was the first commercially avaliable dubstep compilation and majorly helped bring the genre into the limelight, and for many listeners, it was the first time they were exposed to the music.

In 2008, Caspa joined highly respected artist agency ‘Coda’, this lead to a string of high profile gigs & festival performances such as Glastonbury, Global Gathering, Big Chill and Glade aswell as taking Caspa as far and wide as Isreal, New Zealand, America, Canada and all across Europe and the UK.

Caspa’s recently started sister label to Dub Police; ‘Sub Soldiers’, was now thriving with two installments of the popular ‘Ave It’ series, amongst other huge tracks to come out of the label. It was also at this time that Caspa & Rusko were approached by Lennie De Ice to remix the foundation setting Jungle anthem ‘We I.E.’ which had been one of Caspa’s all time favourite dance tracks. Straight after, Caspa’s highly successful remix of TC’s drum and bass anthem ‘Wheres My Money’, had become one of the biggest dance tracks globally and had grown into one of the biggest crossover tracks of 2008, propelling dubstep to the masses.

Fast foward a year from the release of the FabricLive CD, Caspa and the Dub Police have found their home at Fabric, holding down a bi-monthly night alongside DJ Hype & Pascal’s True Playaz residency at this prestigious nightclub. With an album on the horizon, aswell as other major projects including a mix compilation and a remix for EMI, Caspa shows no signs slowing down, and 2009 is set be the year of the ghost. 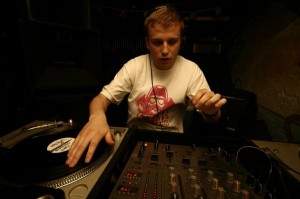